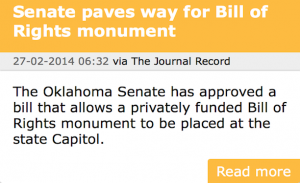 After outreach from MyBillofRights.org* and with the sponsorship of State Senator Patrick Anderson (R-Enid) the Oklahoma Senate unanimously passed SB 1159 authorizing a privately funded monument of The Bill of Rights at the Oklahoma State Capitol. The measure will now be considered by the Oklahoma House.