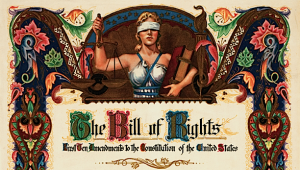 Two hundred twenty years ago today, on December 15, 1791, something happened that changed history forever. Virginia ratified The Bill of Rights, becoming the 11th state to do so, and thus making it part of the new Constitution.
Foremost among the ways that history was changed was by preserving the fledgling new country called the United States of America, after the Articles of Confederation had failed. Most Americans don’t realize that without ratification of The Bill of Rights, the deal between the states on the new Constitution would have fallen apart, and with it quite possibly the United States itself.

Today’s Op-Ed from the Arizona Republic.

Today, 220 years later, The Bill of Rights remains the heart and soul of who we are as a people, and why America remains an inspiration to those everywhere seeking their liberty. Its ingenious balance of personal freedoms and political principles has proven both dynamic and durable, becoming one of history’s most important and influential documents as the global road map for basic human rights.

It’s a remarkable story. All the more remarkable when you consider that, as a high school history teacher from Nogales, Arizona pointed out to me, the provisions of The Bill of Rights only applied to roughly 5% of the human beings living within the United States when it was ratified in 1791. They didn’t apply to slaves. They didn’t apply to Native Americans. They didn’t apply in large part to women, and only in full to white males of a certain amount of property and position.

And yet there is no exclusionary language within The Bill of Rights. So as our concept of individual liberty evolved through the experience of it – as well as through the wrenching tragedy of civil war – we had the blueprint already in hand to build on, to the point where today it is universally accepted that these freedoms and principles belong to everyone.

Accepted, that is, by those with any clear knowledge of them. The sad fact is that at this key crossroads in the life our nation, The Bill of Rights is barely taught in our schools anymore, and nowhere to be found in our public square. Worse, it is so uncelebrated in our public discourse that last December 15, while flipping through the morning news shows, I heard the following on no less than three networks: “It’s December 15, and you know what that means! It’s National Cupcake Day.”

America is the first nation in history founded around a set of ideas and principles, rather than a single race or culture. Our greatest achievements can be traced to when we’ve fought to live up to these ideals, and our greatest failures to when we’ve abandoned them.

I hope you’ll join with us in celebrating the enduring genius of our Bill of Rights on this, it’s 220th anniversary. Great ideas make a great nation. Looking down the difficult road ahead, it might be a good time to revisit those that made America the light of the world.