MyBillofRights.org* is pleased to announce that the Arizona Department of Administration has conditionally approved Kincannon Studios preliminary design submission for our site in Wesley Bolin Plaza, pending a comprehensive agency review in the first half of 2011. 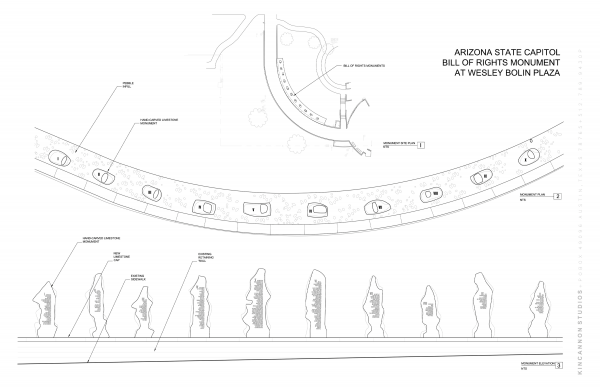 The monument will feature ten limestone monoliths ranging from 7′ to 8 1/2′ in height, each with the text of one amendment sandblasted onto it, arcing along the crest of the hillside adjacent to the pathway that leads the Vietnam Veterans Memorial. As envisioned in the design narrative by designer Joseph Kincannon, “their surfaces cut with undulating contours that accent the appearance of the natural cleft of the stone, only slightly manipulated by the human hand … evoke the primal grandeur of so many of Arizona’s natural wonders. This gathering of ten free-standing monoliths, sentinels in stone standing along across the crest of the hill; each separate and unique yet clearly connected to the others; massive and grounded while thrusting skyward … speaks to the enduring destiny of a people bound together and lifted up by their passionate embrace of individual liberty.” 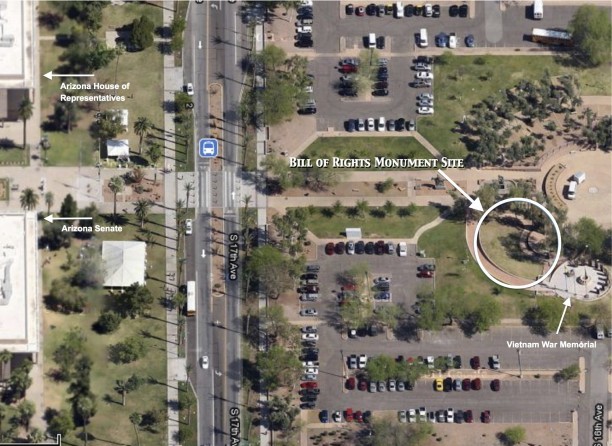