Ground has been broken at the the site of America’s first monument of The Bill of Rights. MyBillofRights.org* Executive Director Chris Bliss did the honors, with Sundt Construction project manager Jeff Esgar doubling as official photographer for this shot. 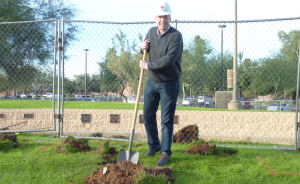 Sculptor Joseph Kincannon and his team have completed all ten amendment monoliths, pictured below awaiting shipment to Arizona from Kincannon Studios in Austin, Texas. The monoliths are scheduled to shipped on November 20th.