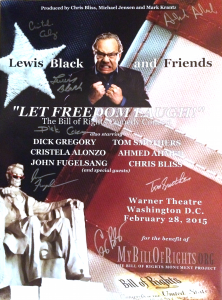 The show marked the official launch of our Matching Fund Endowment, which is designed to seed development of Bill of Rights Monument projects at State Capitols across America. The concert was also taped for future broadcast on AXSTV, with the live performance footage to be accompanied by short interview segments with all the artists, as well as Executive Director Chris Bliss.

MyBillofRights.org* thanks all these great acts, along with producers Michael Jensen and Mark Krantz and co-producer Tisha Fein, for giving so generously of their time and talent. Extra thanks to Messrs. Black, Gregory and Smothers for volunteering to anchor yet another unforgettable evening of comedy on top of their appearances at our Phoenix Symphony Hall gala.